Only effective homemade remedies no bullshit

The idea is to use low cost home remedies and tools found in every kitchen to kill ‎gnats safely fast.‎
Who need natural homemade remedies to kill flies and nats inside house?‎
If you do not want to hurt yourself and your children the harmful chemicals ‎
Kill gnats without poisoning your house
If your home budget poor and can not buy more gadgets
Feared of killing beautiful ornamental potting plants inside house
You have the time and patience to build a powerful homemade trap yourself at your ‎home to get rid of the flying insects final.‎
Strategy aims on three pillars:‎
Identify the areas where gnats is breeding and the type of gnats.
Replace heavy infested areas with newer ones with continuous cleaning and drying
Prepare and Setup insect traps in each room and kitchen as well as the pots of ‎household plants

Changing the old infested regions with knats is appropriate step to ensure home traps ‎will be working as magic.‎
Replace the mattresses and wet cloth
Close water leakage places well
Replace the garbage bags after good emptied
Keeping fruit in an area that gnats cannot get to will also deter them from coming ‎around; ‎
Removing food sources such as over ripe fruit to rotting potatoes and onions will ‎deter the gnats from hanging around that area.‎
Close doors and windows when applying traps so as not to enter more flying insect’s ‎infection into the house from outdoors.‎

Flavored Vinegar recipes to kill all gnats inside house

Vinegar smell is good for gnat’s nose, so that we can use vinegar to attract them and ‎kill them all without side effects on plants or harassing kid’s skin. ‎
Apple cider vinegar is made up of active substances to get rid of flying gnats safely.‎

Vinegar Spray
The smell of vinegar scents gravitate flying insects while repel other crawling insects ‎such as ants.‎
Place the bottle filling 50% of the vinegar and 50% water‎
Sprayed on surfaces several times a day
Thus is the simple way getting rid of them completely

Vinegar Trap
Making Vinegar trap is as easy as ABC
Place a cup of diluted vinegar in a jar bottle or used cola can with plastic ‎wrap covering the closure; let the vinegar attracted gnats into ‎the jar by creating several small holes in the plastic wrap, gnats enter ‎he vinegar trap with no way to return.‎

Vinegar Soap trap
Put a small amount of vinegar diluted with a mixture of soap solution in a dish
In the center of the dish, place a candle or any light source
Mark all the lights are dimmed or closed throughout the night
Flying insects gravitate to the light source
Insects smell the vinegar and fall in the dish
Soap plunges insect that falls so that they can not do it again after they wake up 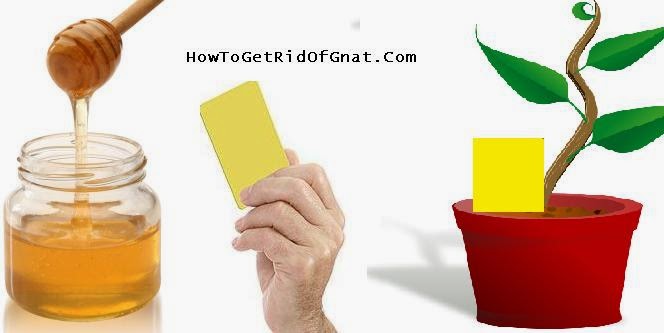 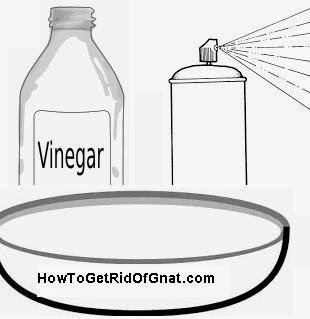 You can mix Vinegar with any other scents such as pepper, mint, rosemary, or mixing ‎with backing soda to maximize the job of vinegar.‎
As the jars fill up with dead gnats, you may need to dump the contents, wash, and ‎refill.‎

Honey glue Sticky Trap
We use an adhesive material such as glue or gum, gnat insect will stick to it until the ‎death
We use a yellow card because the insects are attracted to certain colors such as yellow
Can use honey or liquid food residues to cover the card from both faces
Fix the sticky cards whenever gnats are coming from or appear such as kitchen, ‎bathroom, plant pots, sleeping rooms, etc
Replace the cards once they are filled with dead insects.‎

Alcohol Spray
Alcohols have corrosive effect on plants so that they cannot be applied on ‎houseplants, however it can be with high cost.‎

Killing drain gnats with viscous oils
Vegetable Oil, neem oil, petroleum oil are good remedies to get rid of drain gnats and ‎fungus gnats around sinks and inside pipes.‎
Drain the sink well before apply ‎
Pour enough amount of oil into the drain, to ensure that he oil infiltrated into the ‎pipes, do not forget to apply oil to edges to close any possible escape way ‎
Apply during night or when you are out is the best tactic
Next day, let the water tap open to leaking oil away.‎
Repeat for more two days to get rid of all gnat eggs infested in the pipes and around ‎edges. ‎

The magic tactic for getting rid of house gnats:‎
Try the apple cider vinegar before going to work or during night and it will work ‎to kill all flying adult gnats. Do the vegetable oil in one drain and the ammonia in ‎the restrooms; it will kill all eggs and larvae too. Clean with bleach 3-4 times ‎instead of twice a week to repel them away.‎

Important notes:‎
Use home material to kill gnats safely in several ways
You can mix all kitchen remedies o make a powerful natural gnat trap.‎
Use both static traps and sprayers to maximize the effect to get rid of all gnats ‎population. ‎
Repeat and reapply to kill all stages and eggs of gnats.‎

Further details how do I get rid of gnats indoor.
Keep following for more effective solutions, traps, and recommended products.