“If there is No Wet Topsoil, Fungus Gnats Naturally Vanished!‏”

Next Three Sections about:
Fungus Knat Sources, Signs, Differentiation, and diseases; Skip if you already know that.

Where is the fungus gnat coming from? ‏
Fungus gnats infest home, office, commercial and apartment plants, as well, ‏
Fungus gnats need wet conditions to thrive
Overwatered matter has begun to decay in the topsoil‏,‏
Wet topsoil have broken down organic matter like dead leaves
Fungus gnat lays their eggs in the top layer of wet soil‎‏.‏
Spores of fungus gnat will grow once warm and wet conditions in the soil are present.‏
Plants require warm wet soil are more likely to get more damage like cannabis and these ‎perennials, shrubs and trees: astilbe, cardinal flower, sedge, rose mallow, ‎summersweet, hibiscus, European cranberrybush viburnum, leucothoe, fothergilla, ‎inkberry, sweetspire, sweet and swamp azaleas, white spruce and black gum.‏
More Gnats Sources
Symptoms and signs to identify them:‏
Learn How to detect them
What Fungus gnats are?‏
They are small, dark, short-lived flies, of the families Sciaridae,Diadocidiidae, ‎Ditomyiidae, Keroplatidae, Bolitophilidae, and Mycetophilidae (orderDiptera); they ‎are sometimes placed in the superfamily Mycetophiloidea‏.‏

What is difference between Fungus gnat and Fruit Fly‏?‏
Remember that Fruit flies are brown/yellow/orange while fungus knats are dark ‎brown or black. Fruit flies tend to be bigger/fatter and easier to see than tiny fungus ‎nats‏.‏

Adults of fungus gnats are 1/8 inch long, delicate, black flies with long legs and ‎antennae. There is a distinct “Y-shaped” pattern on the forewings. The larvae are ‎wormlike and translucent, with a black head capsule, and live in the growing medium ‎of houseplants.‏

Fungus gnat larvae usually are located in the top 2 to 3 inches of the growing ‎medium, depending on moisture level, while fruit fly exists whenever the rotten food ‎exists.‏

Most fungus gnats are merely annoying and cause relatively little damage to plants. ‎But several species of fungus gnat larvae feed on roots, causing damage to African ‎violets, cannabis, Geraniums, Carnations, Poinsettias, and other houseplants. Others ‎burrow into stems and leaves.‏
You will see adults resting on plants, soil, windows, or walls, or you might see them ‎in flight.‏
They may be quite annoying to humans as they fly into their faces, eyes, and noses.‏
Identify them well
Monitor for larvae by chunks of raw potato placed in pots with the cut sides down ‎‎(not the peels)‎‏, you can see them trapped to potatoes.

What do fungus gnats look like?‏
Remember the better the diagnosis the effective the solution
Tiny flying black bugs around your plants & crawling on your soil
Tiny white or translucent larvae with black heads in the soil ‎
Seedlings are weak for no apparent reason
Plants show wilting, yellowing, drooping, spots
Plants will growing slowly or show no growth and thus yields can be reduced

Why kill fungus gnats?
Fungus gnats can inflict extensive damage to seedlings in houseplants‏, ‏
Gnat’s Larvae helping in the decomposition of organic matter:‏
The larvae feed on plant roots that have sat in drain water too long and are thus rotting ‎and may be attracted to fungus growing in saturated topsoil, ‏
Some fungus gnats are exceptionally hardy, being able to tolerate cold conditions ‎through their possession of antifreeze proteins.‏

Fungus gnat borne disease:
‏The gnats’ infestation can seriously stunt your plant’s growth by:‏
Causing discoloration in the foliage ‏
Malformed branches and limbs
The larvae play a role in the spread of plant diseases with dangerous healthy ‎effectiveness, such as: Pythium on their feet, Verticillium, Cylindrocladium, and ‎Scelerotinia‏.‏ 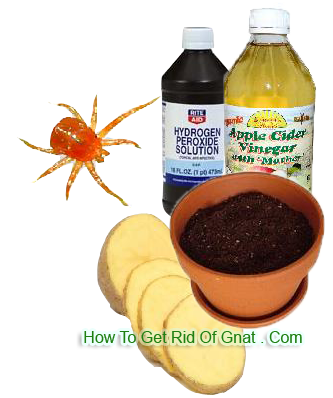 Today’s Solutions for getting rid of Fungus Gnat

Most of the fungus gnat’s life is spent as a larva and pupa in organic matter or soil, so ‎the most effective control methods target these immature stages rather than attempting ‎to directly control the mobile, short-lived adults.‏
Previous Topics, Kill Fungus Gnat
1-  Allowing the soil to dry to destroy breeding habitat which will reduce their numbers, ‎by‏:‏

5- Yellow sticky traps for fungus gnats
Place yellow sticky cards in the grow area which covered with a glue that will trap ‎adult fungus gnats, bringing down their numbers. Keep your sticky yellow cards up ‎until Fungus Gnats are completely gone which can a few days to a few weeks, ‎Yellow sticky traps can be cut into smaller squares, attached to wooden skewers or ‎sticks and placed in pots to trap adults.‏

Insecticides Gnaticides Vs Natural Remedies, which work well‏?‏
The most effective treatments are those that are persistent; killing adults for up to ‎three days. A number of pyrethroid-based insecticides, with extended persistence, are ‎available for use on houseplants including those containing the following active ‎ingredients: bifenthrin, cyfluthrin, permethrin, and lambdacyhalothrin. Short-‎persisting contact insecticides such as those containing pyrethrins, soaps, oils, and ‎neem, do not provide sufficient long-term control of fungus gnat adults and require ‎repeat applications at short intervals (couple of days) to exhibit effects‏.‏
When using these products on houseplants or interiorscape containers, if possible ‎move plants outdoors for treatment as a precaution, and wait about a day after ‎applying the chemical before bringing them back inside‏.‏

Getting Rid of Fungus Gnats in BathroomAlso Drain Gnats lay eggs in sinks and around, they tend to hatch and buzzing around ‎your food and hit your face, Pouring Vegetable Oil, neem oil, petroleum oil are good ‎remedies to get rid of drain gnats and ‎fungus gnats around sinks and inside pipes.‎
More about that: Kill Kitchen and Bathroom Gnats

Nothing are going to work unless stopping overwatering your plants
Do Not use Alcoholic wine or Chlorine water to kill soil larvae, or your houseplants ‎will be destroyed‏.‏
Nothing is 100% effective; just mix them to make a powerful tool to kill fungus nats‏.‏

Do not forget o Subscribe for more incoming solutions and ‎discussions.‏